Teamwork makes the dream work - from zero to Jira 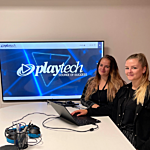 What does ‘smart casual’ mean? This was my first thought when I woke up that morning. Similar thoughts quickly followed: Do I have to eat lunch at a fancy restaurant to fit in? Should I bring my own lunch instead? And where I can eat it?

Seriously, I didn't know what to expect from the company or the work; as an intern, this was my introduction to real world work. Questions continued to flood my mind: What is it like to work in a big IT company? How will I know what to do? Are the people nice? Will I really be useful? How can I know everything? …What is my actual job again?

That first week we, the interns, got to know BW, RAP, regulation, CPSS, UAM, DSR, etc. and how complicated the casino business really is—turns out it is not just putting money in a machine, pushing a button, and then taking more money out. Luckily, we had great mentors and colleagues who trained us to ask every kind of question on our minds, which they then answered in addition to ones we didn't ask. My mentor said, “I guess you didn’t understand anything, correct? That’s what I wanted!” Soon enough, this encouragement allowed the hunger to grow for the more difficult tasks, and I wanted to have an impact by being helpful.

When we were more familiar with our roles, the interns decided to socialize: we organized a pool tournament to get to know all the other interns (if someone missed the cue ball, we didn’t judge because we had fun together). It turned out that the mentors were also excited about the interns’ pool tournament, so we made a tournament for mentors, too. The final “Mentors vs Interns” game was tough (guess who won). Also, we went karting which was exciting and packed with adrenaline. We found out that we had some true masterclass drivers (Mihkel and Marvin) and found out who the slowest driver is (yes, you guessed right, it was me).

Camaraderie among us interns continued into the workplace, especially around the coffeemaker, where even a non-coffee drinker (I discovered cacao coffee!) got to take part in a discussion: what is the one word that you would use to describe the internship? Some answers were: inspiring, abbreviations, freedom, ice cream, colleagues, excitement, team spirit! As you can see, very positive words for our experience and ice cream had become an important part of our days - who could say no to that?

When it came to the work part of work, from the first day, I was included in every meeting my mentor had even though I did not understand anything; even the words used were super weird, like its own language. The emails were practically unreadable; I was surprised at how much you can say with only six capital letters next to one other. As it turned out, there are a lot of words that only Playtech people knew. But through regular interaction, my understanding slowly expanded. Who would have guessed that it would be so fun working 9 to 5 with all those important people? The team events were fun and instilled confidence in my work.

I realized how cool it is to work in an international company like Playtech when I was at an internship exchange event with Swedbank and Tele2. People who had visited Playtech’s office talked about how cool it is that we have everyday connections and coworkers all over the world; that we have meetings every day in Teams with people in Israel, Estonia, London, USA, just to name a few. I had already been used to it, but that’s when it hit me: this is remarkable! Playtech truly brings people closer and made me realize that as diverse as we are, we are all still the same.

Internship exchange with Swedbank and Tele2

In case you were wondering, ‘smart casual’ is relaxed with a polished appearance, like chinos with a collared shirt. And lunch began with people kindly asking you to join lunch, although I ended up eating a salad up on the fourth floor because it turned out to be the most convenient for me. My other questions were cleared up as well and guess what: no one knows everything, even people who have worked here for over ten years…